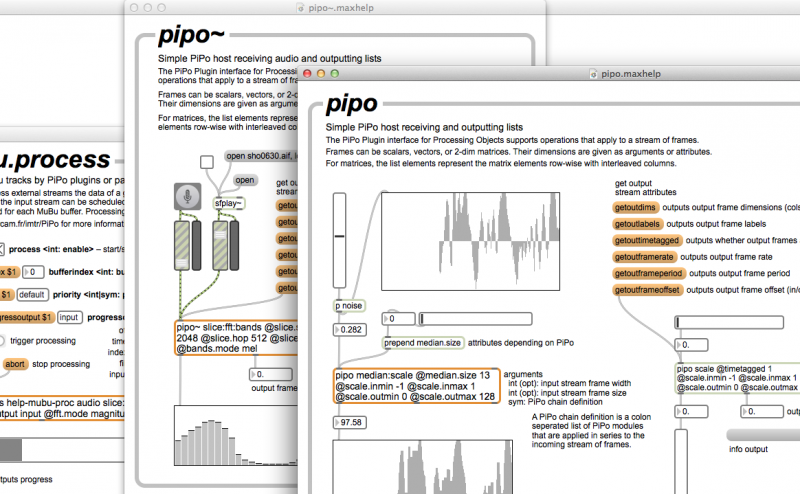 PiPo is an extremely simple plugin API for modules processing streams of multi-dimensional data such as audio, audio descriptors, or gesture and motion data. The current version of the interface is limited to unary operations. Each PiPo module receives and produces a single stream. The elements of a stream are time-tagged or regularly sampled scalars, vectors, or two-dimensional matrices.

PiPo has been developed in the context of designing interactive audio applications in Max/MSP and on different platforms integrating applications prototyped in Max/MSP. In this context, we constantly use a set of rather simple modules forfiltering, transforming, extracting, and segmenting streams of audio and/or motion capture data. The same modules are used to process incoming real-time streams dedicated to the control of other audiovisual processes and for the automatic annotation of pre-recorded or abstract data streams serving as content for resynthesis or recognition.

PiPo is designed to allow for easily applying the same set of operators on streams of different origines, different scheduling, and on different platforms.

PiPo picks up on many ideas that already contributed to the development of FTM & Co and especially the Gabor and MnM libraries as well as others that came up while developing and using FTM & Co.

PiPo has been developed in the framework of the MuBu project and the underlying formalization of streams inherits the principal features of the the MuBu track data structure representing recorded data streams.

The focussed formalization of data streams and its extremely simple C/C++ implementation also should allow for very easily recycling PiPo modules and related code fragments in any context.

A set of Max/MSP externals is freely distributed with MuBu for Max via the IRCAM Forum.

The PiPo API and an example project for developers as well as Max/MSP users is distributed on GitHub. The current version 0.2 of the API consist of a single header file for modules and about 50 lines of code.

PiPo has been developed to be make things simple for users and developers.

Each module can configure its internal state depending on the attributes of the input stream (e.g. memory allocation and pre-calculated state variables) before propagating its output stream attributes to the next module.

This way, the attributes of the input stream are propagated through a series of PiPo modules before starting the actual stream processing.

In summary, a PiPo stream is described by the following attributes:

The PiPo SDK comes with a template class PiPo::Attr that permits to define scalar, enum, or variable or fixed size vector attributes of a pipo module that are exposed to the host environment. Since certain parameter changes may also change the attributes of a module’s output stream, PiPo provides a mechanism for signaling these changes through the following modules to the processing environment (i.e. the PiPo host).

For MAX/MSP PiPo includes a binding to extend a PiPo class to a Max/MSP external that then declares the module’s parameters as Max/MSP attributes and implement the required setters and getters.

The PiPo API consists of an abstract class of a few virtual methods for propagating stream attributes (see above), frames, and additional processing control through a series of modules:

PiPo hosts have to provide the following functionalities:

For now, there is no API that would support the implementation of PiPo hosts (see section Current Project State above for available hosts and code examples). 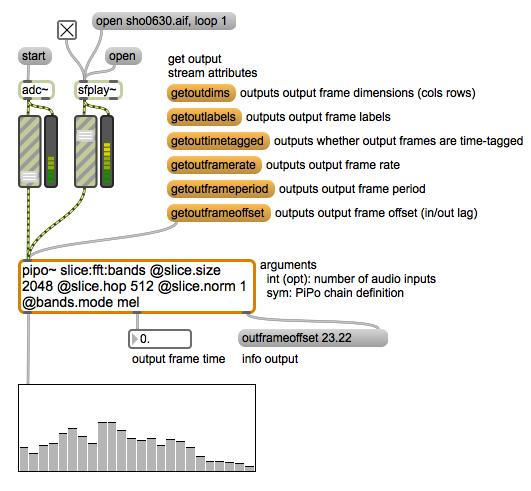 Help patch of pipo~, a simple PiPo host for Max/MSP receiving an audio stream and producing a stream of lists 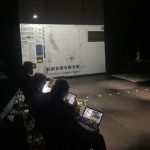 Other posts in Category "Software" 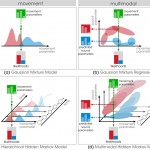 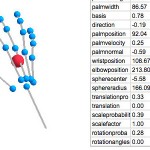 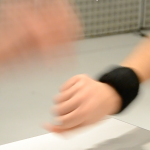